Living grandmaster of highlife music, Dr Victor Abimbola has retired from active musicianship due to his failing health and doctor’s standing instruction to desist from performances henceforth. 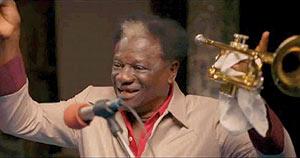 This update was made public last weekend when the legend apparently missed from the usual ‘nightlife faithful gathering’ held every Saturday at the Stadium Hotel, Iyun Street, Surulere Lagos. We scooped that the celebrated trumpeter actually stopped attending his regular weekly shows and occasional performance for over one year when it became obvious that his health is failing steadily. Based on this, his doctor advised him strongly to cease immediately from performing.

“Aside from attending his gigs, he no longer comes to work regularly as a result of age-related health issues, his manager, Gbenga Adewusi divulged. It is on record that Dr. Olaiya held sway in the mid 50’s which attracted the old Daily Times newspaper organization to go for him as the official band that entertained during our independent anniversary in the year 1960.