More Musa Directed: Bringing Sexy Back!!! Olamide TURNS UP Major Heat With New Video My wife is responsible for me being Majid, Ghanaian Actor Majid Michel

Tunde Kelani was born on the 26th February, 1948.
He is a Nigerian
filmmaker, storyteller, director, photographer,
cinematographer and producer.
Tunde Kelani, popularly known as TK was born in Lagos but at the 5 year old, he was sent to live with his
grand parents at Abeokuta in Ogun State. Tunde
attended the Oke-Ona Primary School in Ikija,
Abeokuta and had his secondary school
education at Abeokuta grammar school, Idi Aba.

Tunde’s grandfather was a Chief, the Balogun of Ijaiye Kukudi, Abeokuta, that gave TK a great
privilege to witness most aspects of
Yoruba ways of life, religion, literature, philosophy,
environments and Yoruba world view in arts and culture. 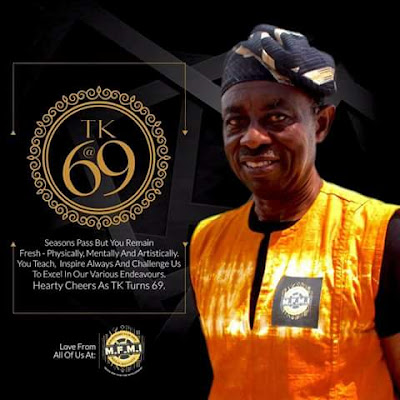 Tunde Kelani had been interested in photography from his
primary school. During his secondary
school days, he invested
money and took his time to learn
photography.
After he finished his Secondary School, In 1968/69, Tunde Kelani returned to Lagos State to become an apprentice photographer at the Studio of Oloye Dotun Okubanjo at Broad Street, Lagos.
Okubanjo became Pioneer President of Association of Advertising Agencies of Nigeria, Formally Association of Advertising Practitioners of Nigeria in 1973.
Tunde Kelani later trained and worked at the
then Western Nigeria Television (WNTV) as a
trainee film cameraman. Then he then moved to NBC
channel 10 in 1974.
He further attended the London Film School where he bagged a degree in Art and Technique of
film making,
Tunde Kelani worked as a BBC TV and
Reuters correspondent, and in Nigerian TV in 1970.
For Reuters, he travelled to Ethiopia to cover
the drought disaster and to Zimbabwe three times to
cover independence there.

After he completed his education from the London Film School, he
returned to Nigeria and co-produced his first
film with Adebayo Faleti called The Dilema of
Rev. Father Michael. (Idaamu Paadi Minkailu), Other co-producers include Alhaji Lasisi
Oriekun, Wale Fanubi – his partner from
Cinekraft, Yemi Farounbi and screenplay by
Lola Fani-Kayode.
In 1990,
Kelani was an assistant director and an actor
in an American drama film, Mister Johnson,
shot in Nigeria. Starring Pierce Brosnan and
Maynard Eziashi , the film was based on a
1939 novel by Joyce Cary .
He has also
worked on most feature films produced as a cinematographer.
Some of the films he worked
on included:  Iya Ni Wura; Anikura, Ogun Ajaye;
Taxi Driver ; Iwa and Fopomoyo .
In 1991, Tunde Kelani started his own
production company, Mainframe Films and
Television Productions – Opomulero, so he
could produce films and not just lend
technical support. Having emerged from the
world of theatre and literature, adaptations of
books and plays for cinema are the core of
Kelani’s filmmaking practice and through them
he celebrates writers and their work to what
he sees as a public that reads less
and
less.
At Mainframe, he has produced movies such
as Ti Oluwa Nile , Ayo Ni Mo Fe , Koseegbe ,
Oleku, Thunderbolt (Magun) , Saworoide,
Agogo Eewo, The Campus Queen, Abeni,
Narrow Path, Arugba and Maami.
His Latest work, Dazzling Mirage, an
adaptation from a novel by Olayinka
Egbokhare, is a love story of how a sickle-cell
suffer overcomes social stigma, prejudice and
her own low self-esteem, to achieve success,
marriage and motherhood.
If you like this, please share!