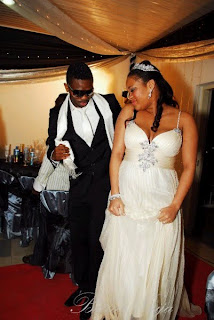 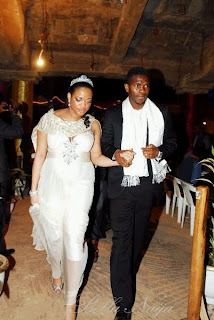 That ex-most beautiful girl in Nigeria, Adaeze Igwe got married on New Year’s day is no longer news.Two weeks ago, Ex- MBGN Adaeze Igwe walked down the aisle with Super Eagles Vice Captain, Joseph Yobo. The wedding took place in Jos at 3:30am on New Year’s day and the were joined in Holy Matrimony by the General Overseer of EBOMI Prayer City, Prophet Isah El Buba.
What is news is why Adaeze rushed into marriage at 19. We can tell you that for free. It is because she is pregnant. Since her hush-hush marriage, tongues have not stopped wagging as a lot of people couldn’t understand why they would both opt for a very low key wedding since they both made their affair very public and the news of their romance was everywhere. Even at that, the news of their wedding is still the talk of the town till date. According to what the couple told some people, the reason they decided to have a low key wedding was because of that that they gave their life to Christ recently during their recent encounter with Pastor Buba in London . And he was actually the one that told them to go for a low key wedding.
But fresh fact has emerged after the wedding. According to what was gathered, that contrary to what was speculated as the reason for their wedding, one of the thing that led to a rush in the couple tying the knot as fast as possible despite the fact that Adaeze once said she was not going to think about marriage until she is at least, 26 years old was the fact that Adaeze is now an expectant mother as she is almost 5 months pregnant. It was even so obvious judging from her wedding pictures where she looked exactly like a pregnant woman. Her looks has also changed as she is now very chubby and added weight unlike her slim fitted old self. Sources also revealed that Adaeze’s mum who also plays a major role in her life couldn’t imagine her having a child out of wedlock that was why everything went so fast like that. But in an interview the couple granted a soft sell magazine last week, they spoke extensively on why the opted for a low key wedding. Yobo said in the interview, that when he came to Nigeria for the summer, he had intended to stay for a short time as he does usually, but then, he met Adaeze and he fell in love. “So I spent the whole of the summer holidays in Nigeria, which had never been done before. To show how serious my intentions were, I even met with her family to assure that she is in safe hands. Her mum immediately approved the relationship. We have always talked about having a child together and we even joked on how beautiful the baby would look. But we could not do the wedding before now because of the nature of my job and because of Ada not being around as she had a tight schedule in school. We wanted it special and the night of 31st December 2009 was the only time all our family members were going to be around. After the date, I am going to be busy at work till July 2010”.
Adaeze also added that, “I can’t understand why that speculation would come up. I know in this modern world, people don’t get married because of pregnancy and apart from that, I am still very young to rush into marriages because of that. Meanwhile, we had concluded other forms of marriage before the church wedding, though we had kept that to ourselves”
Adaeze has since relocated back to UK after her wedding, which is coming about six months after they met.
What has helped her is the support she has received from her mum. This is because there is this bond between mother and daughter which is very strong, as her mother more or less doubled as her manager during her reign as MBGN. There is nothing she does without the approval of her mum.
If you like this, please share!