Monica Ogah from Benue State who won the fourth edition of MTN Project Fame West Africa and thus joined the coveted Fame Alumni with Iyanya, Chidinma, and Mike Anyasodo is working tirelessly to make her name become a household one. In accordance  with her recording contract with MTN Ultima Studios, Monica revealed that she had been in the studio working hard to finish her debut album. Here, in this chat with our reporter, she talks of what she’s been up to lately. Excerpts:

How has life been after Project Fame? Life after Project Fame hasn’t been easy, but I give thanks to God for being with me throughout. I  also thank my family for their support. While in the  Project Fame it’s you facing or contesting against few other people in the House but life after Project Fame is totally different, because you are facing a whole lot of different people; you are competing with the entire world, it’s a different game entirely, the whole of west Africa would be watching you and monitoring you. It is like the whole  world has placed a responsibility on your shoulders and you must achieve something of substance to prove you are not a fluke.

Has Project Fame platform really helped you? Project Fame has really helped because it isn’t easy to start music from the very scratch, it’s a big platform for someone to start a music career; they give you the name; people recognize you; and because of the long days you were featured on different television stations across the nation people recognize you immediately they see you. So, it is easier to ride on that platform  than to start the journey from

How long have you started singing? I started singing at the Sunday school in the church; my mum was the church choir mistress, so singing is what has been part of my family because it has always been in our veins

Is music a career to you or what? Music is my life, music is something I love doing, like I said earlier, I grew up in a family where music runs through us, music is my passion and it’s what I love doing. I  can’t stop doing music, I have to keep doing it because I love to do it and it isn’t that I don’t have other things doing but basically I can’t leave music and music can’t leave me because it is my passion and I love doing it.

How do you see your album compared with that of other artistes? The ability for me to believe in my album which is the first count. Then this is Monica Ogah, hers is different from what you would be listening to in other people’s albums, basically, the originality is what will differentiate us, more so, I don’t want to sound like anybody, I don’t want to look like anyone, I just want to be me and make the originality in me stand out from others. 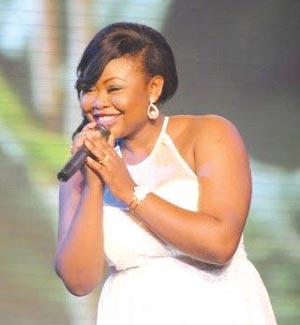 What should be expected in your album? Well, my fans and  music lovers should expect mixed feelings from my album, because it is a total package album which contains dancing, inspirational courageous songs, if you want to dance, you will find danceable song, if you want to get inspire, there’s inspirational song as well, the album consists of different kinds of music in one package

Most of the songs in the album but ‘Body Hug’ is my number one song followed by ‘Suddenly’ featuring Chidinma, ‘End of Story’ and ‘Tomorrow’ produced by TY MIX. With your songs being played across the broadcast stations, has response been encouraging? Well, so far the response has be

Which of your songs are you promoting for the album? Most of the songs in the album but ‘Body Hug’ is my number one song followed by ‘Suddenly’ featuring Chidinma, ‘End of Story’ and ‘Tomorrow’ produced by TY MIX. With your songs being played across the broadcast stations, has response been encouraging? Well, so far the response has been very encouraging and I’m very much happy with the feedback on the album.

Being a singer do you prefer the digital recording to the live band? Live band has always been part of me, I sang with the live band in my church before I started using studio and if you give me an option to pick between digital studio and live band, I would pick the live band because it gives me the opportunity to express myself.  I won’t be restricted to singing the same way I sang in the album. With live band I have the ability to express myself, though there are other things I could do, it also helps you as an artiste to show your diversity, like you are really an artiste, people that see you know this person can sing and I have always chosen a live band over other forms of stage performances.

Was any of your songs recorded in live band studio? In this part of the world it is hard to see a live band studio, but I make sure that some of the songs sound live; if you take time to listen to my songs, like ‘Tomorrow’ it sounded like a live band production. But I would love to record in a live recording studio anytime.

What do you do apart from music? Music is my number one priority; I would have different things doing,  like my mum always said that it’s good when you have several things doing. So music is my number one priority, music is my life and it’s my style and every other thing I want to add  to it is just pastime. How have you been managing with your money and car? Well, I thank God for my family, though we are not rich, but we are okay, I’m doing good with the money, managing it with my day to day activities and the car has been keeping me moving and I thank God for the life He gave to me.