The 2017 Wealthfront Career-Launching Companies List BRANDS: ‘We Always Give People a Path Into Our Technology’: Inside IBM’s Incredible Content Marketing 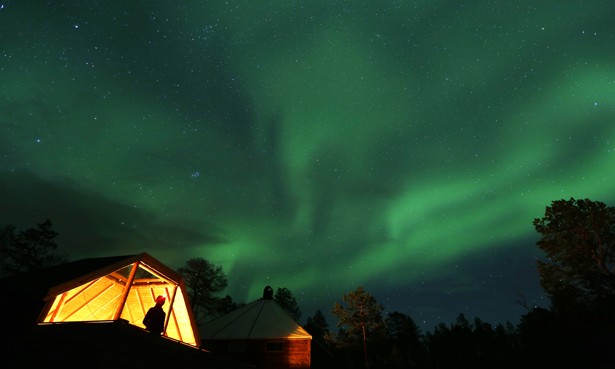 Northern lights over a camp north of the Arctic Circle, October 2014 Yannis Behrakis/Reuters

JAMES HAMBLI
Forty-seven percent of the time, the average mind is wandering. It wanders about a third of the time while a person is reading, talking with other people, or taking care of children. It wanders 10 percent of the time, even, during sex. And that wandering, according to psychologist Matthew Killingsworth, is not good for well-being. A mind belongs in one place. During his training at Harvard, Killingsworth compiled those numbers and built a scientific case for every cliché about living in the moment. In a 2010 Science paper co-authored with psychology professor Daniel Gilbert, the two wrote that “a wandering mind is an unhappy mind.”
For Killingsworth, happiness is in the content of moment-to-moment experiences. Nothing material is intrinsically valuable, except in whatever promise of happiness it carries. Satisfaction in owning a thing does not have to come during the moment it’s acquired, of course. It can come as anticipation or nostalgic longing. Overall, though, the achievement of the human brain to contemplate events past and future at great, tedious length has, these psychologists believe, come at the expense of happiness. Minds tend to wander to dark, not whimsical, places. Unless that mind has something exciting to anticipate or sweet to remember.
Over the past decade, an abundance of psychology research has shown that experiences bring people more happiness than do possessions. The idea that experiential purchases are more satisfying than material purchases has long been the domain of Cornell psychology professor Thomas Gilovich. Since 2003, he has been trying to figure out exactly how and why experiential purchases are so much better than material purchases. In the journal Psychological Science last month, Gilovich and Killingsworth, along with Cornell doctoral candidate Amit Kumar, expanded on the current understanding that spending money on experiences “provide[s] more enduring happiness.” They looked specifically at anticipation as a driver of that happiness; whether the benefit of spending money on an experience accrues before the purchase has been made, in addition to after. And, yes, it does.Essentially, when you can’t live in a moment, they say, it’s best to live in anticipation of an experience. Experiential purchases like trips, concerts, movies, et cetera, tend to trump material purchases because the utility of buying anything really starts accruing before you buy it.

Waiting for an experience apparently elicits more happiness and excitement than waiting for a material good (and more “pleasantness” too—an eerie metric). By contrast, waiting for a possession is more likely fraught with impatience than anticipation. “You can think about waiting for a delicious meal at a nice restaurant or looking forward to a vacation,” Kumar told me, “and how different that feels from waiting for, say, your pre-ordered iPhone to arrive. Or when the two-day shipping on Amazon Prime doesn’t seem fast enough.”

Gilovich’s prior work has shown that experiences tend to make people happier because they are less likely to measure the value of their experiences by comparing them to those of others. For example, Gilbert and company note in their new paper, many people are unsure if they would rather have a high salary that is lower than that of their peers, or a lower salary that is higher than that of their peers. With an experiential good like vacation, that dilemma doesn’t hold. Would you rather have two weeks of vacation when your peers only get one? Or four weeks when your peers get eight? People choose four weeks with little hesitation.
Experiential purchases are also more associated with identity, connection, and social behavior. Looking back on purchases made, experiences make people happier than do possessions. It’s kind of counter to the logic that if you pay for an experience, like a vacation, it will be over and gone; but if you buy a tangible thing, a couch, at least you’ll have it for a long time. Actually most of us have a pretty intense capacity for tolerance, or hedonic adaptation, where we stop appreciating things to which we’re constantly exposed. iPhones, clothes, couches, et cetera, just become background. They deteriorate or become obsolete. It’s the fleetingness of experiential purchases that endears us to them. Either they’re not around long enough to become imperfect, or they are imperfect, but our memories and stories of them get sweet with time. Even a bad experience becomes a good story.
When it rains through a beach vacation, as Kumar put it, “People will say, well, you know, we stayed in and we played board games and it was a great family bonding experience or something.” Even if it was negative in the moment, it becomes positive after the fact. That’s a lot harder to do with material purchases because they’re right there in front of you. “When my Macbook has the colorful pinwheel show up,” he said, “I can’t say, well, at least my computer is malfunctioning!””At least my computer and I get to spend more time together because it’s working so slowly,” I offered.

“Maybe we should destroy our material possessions at their peak, so they will live on in an idealized state in our memories?”

“I don’t know if I’d go that far,” he said. “The possibility of making material purchases more experiential is sort of interesting.”

That means making purchasing an experience, which is terrible marketing-speak, but in practical terms might mean buying something on a special occasion or on vacation or while wearing a truly unique hat. Or tying that purchase to subsequent social interaction. Buy this and you can talk about buying it, and people will talk about you because you have it.

I can’t imagine ever wanting to hear about someone seeing Vampire Weekend, but I get the point. Reasonable people are just more likely to talk about their experiential purchases than their material purchases. It’s a nidus for social connection. (“What did you do this weekend?” “Well! I’m so glad you asked … “)

The most interesting part of the new research, to Kumar, was the part that “implies that there might be notable real-world consequences to this study.” It involved analysis of news stories about people waiting in long lines to make a consumer transaction. Those waiting for experiences were in better moods than those waiting for material goods. “You read these stories about people rioting, pepper-spraying, treating each other badly when they have to wait,” he said. It turns out, those sorts of stories are much more likely to occur when people are waiting to acquire a possession than an experience. When people are waiting to get concert tickets or in line at a new food truck, their moods tend to be much more positive.
Even a bad experience becomes a good story.

“There are actually instances of positivity when people are waiting for experiences,” Kumar said, like talking to other people in the concert line about what songs Vampire Weekend might play. So there is opportunity to connect with other people. “We know that social interaction is one of the most important determinants of human happiness, so if people are talking with each other, being nice to one another in the line, it’s going to be a lot more pleasant experience than if they’re being mean to each other which is what’s (more) likely to happen when people are waiting for material goods.”

Research has also found that people tend to be more generous to others when they’ve just thought about an experiential purchase as opposed to a material purchase. They’re also more likely to pursue social activities. So, buying those plane tickets is good for society. (Of course, maximal good to society and personal happiness comes from pursuing not happiness but meaning. All of this behavioral economics-happiness research probably assumes you’ve already given away 99 percent of your income to things bigger than yourself, and there’s just a very modest amount left to maximally utilize.)

What is it about the nature of imagining experiential purchases that’s different from thinking about future material purchases? The most interesting hypothesis is that you can imagine all sort of possibilities for what an experience is going to be. “That’s what’s fun,” Kumar said. “It could turn out a whole host of ways.” With a material possession, you kind of know what you’re going to get. Instead of whetting your appetite by imagining various outcomes, Kumar put it, people sort of think, Just give it to me now.It could turn out that to get the maximum utility out of an experiential purchase, it’s really best to plan far in advance. Savoring future consumption for days, weeks, years only makes the experience more valuable. It definitely trumps impulse buying, where that anticipation is completely squandered. (Never impulse-buy anything ever.)

That sort of benefit would likely be a lot stronger in an optimistic person as opposed to a pessimistic person. Some people hate surprises. Some people don’t anticipate experiences because they dwell on what could—no, will—go wrong. But we needn’t dwell in their heads. Everyone can decide on the right mix of material and experiential consumption to maximize their well-being. The broader implications, according to Gilovich in a press statement, are that “well-being can be advanced by providing infrastructure that affords experiences, such as parks, trails, and beaches, as much as it does material consumption.” Or at least the promise of that infrastructure, so we can all look forward to using it. And when our minds wander, that’s where they’ll go.